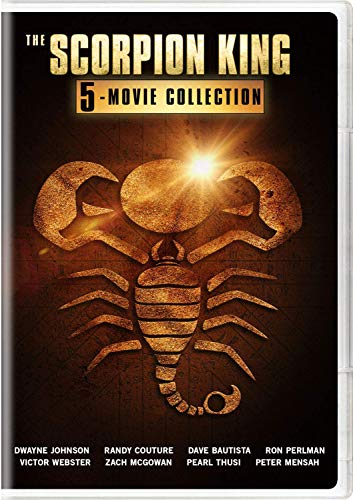 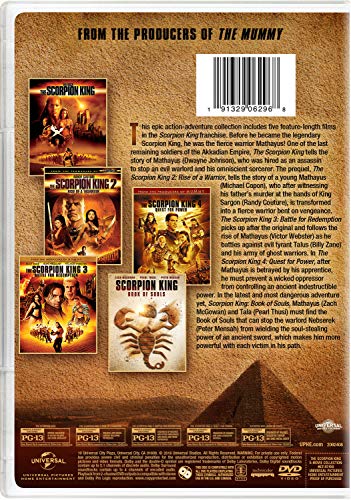 [ad_1]
This epic action-adventure collection includes five feature-length films in the Scorpion King franchise. Before he became the legendary Scorpion King, he was the fierce warrior Mathayus! One of the last remaining soldiers of the Akkadian Empire, The Scorpion King tells the story of Mathayus (Dwayne Johnson), who was hired as an assassin to stop an evil warlord and his omniscient sorcerer. The prequel, The Scorpion King 2: Rise of a Warrior, tells the story of a young Mathayus (Michael Copon), who after witnessing his father’s murder at the hands of King Sargon (Randy Couture), is transformed into a fierce warrior bent on vengeance. The Scorpion King 3: Battle for Redemption picks up after the original and follows the rise of Mathayus (Victor Webster) as he battles against evil tyrant Talus (Billy Zane) and his army of ghost warriors. In The Scorpion King 4: Quest for Power, after Mathayus is betrayed by his apprentice, he must prevent a wicked oppressor from controlling an ancient indestructible power. In the latest and most dangerous adventure yet, Scorpion King: Book of Souls, Mathayus (Zach McGowan) and Tala (Pearl Thusi) must find the Book of Souls that can stop the warlord Nebserek (Peter Mensah) from wielding the soul-stealing power of an ancient sword, which makes him more powerful with each victim in his path.