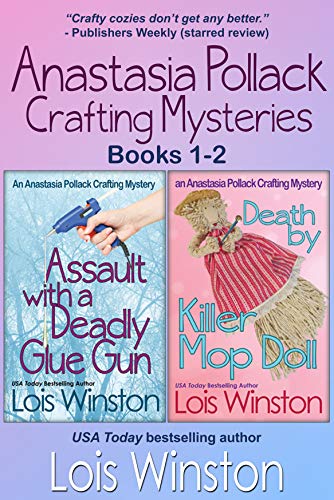 Assault with a Deadly Glue Gun–When Anastasia Pollack’s husband permanently cashes in his chips at a roulette table in Vegas, her comfortable middle-class life craps out. She’s left with two teenage sons, a mountain of debt, and her hateful, cane-wielding Communist mother-in-law. Not to mention stunned disbelief over her late husband’s secret gambling addiction, and the loan shark who’s demanding fifty thousand dollars.

Anastasia’s job as crafts editor for a magazine proves no respite when she discovers a dead body glued to her office chair. The victim, fashion editor Marlys Vandenburg, collected enemies and ex-lovers like Jimmy Choos on her ruthless climb to editor-in-chief. But when evidence surfaces of an illicit affair between Marlys and Anastasia’s husband, Anastasia becomes the number one suspect.

Death by Killer Mop Doll–Overdue bills and constant mother vs. mother-in-law battles at home are bad enough. But crafts editor Anastasia Pollack’s stress level is maxed out when she and her fellow American Woman editors get roped into unpaid gigs for a revamped morning TV show. Before the glue is dry on Anastasia’s mop dolls, morning TV turns crime drama when the studio is trashed and the producer is murdered. Former co-hosts Vince and Monica—sleazy D-list celebrities—stand out among a lengthy lineup of suspects, all furious over the show’s new format. And Anastasia has no clue her snooping has landed her directly in the killer’s unforgiving spotlight.